Debt reduction prospects for PDC Energy (PDCE) now look quite strong in 2021, with improving oil and NGL prices indicating it could generate over $500 million in positive cash flow in 2021. This would allow it to reduce its net debt to around $1.1 billion by the end of 2021 and its leverage to less than 1.0x.

PDC currently looks fairly valued for a long-term WTI $50 oil environment. There remains some uncertainty as to how new Colorado regulations and the possibility of extended freezes/bans on federal land drilling will affect its ability to fully develop its Wattenberg assets.

The current band for 2021 has improved to around $52 WTI oil. As a result, PDC generates expected revenue of $1.621 billion after hedging.

PDC is expected to end up with $1.089 billion in cash outlays with its maintenance capital budget of $550 million. This translates to a projection of $532 million of positive cash flow for 2021 at the price of the strips.

These calculations are consistent with PDC’s estimates for 2021 cash flow. It projected $300 million of positive cash flow at $40 WTI oil and a realized price of $10 for NGLs. Rising oil prices add approximately $170 million to PDC’s cash flow, while expected increases in realized NGL prices add another $60 million to its projected cash flow for 2021. 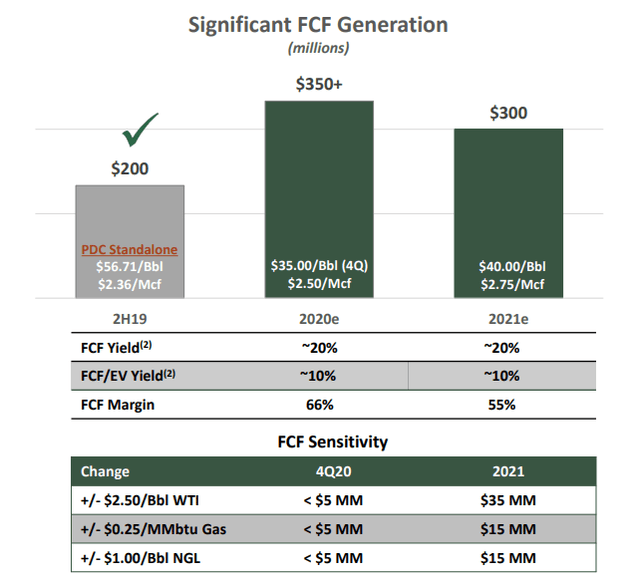 The regulatory environment for long-distance pipelines appears challenging, which could hamper PDC’s Wattenberg assets in the future. For example, the Jordan Cove Pipeline has had recent problems, although this would primarily affect gas producers in western Colorado (such as in the Piceance Basin) rather than producers in the DJ Basin.

DJ Basin’s takeout capacity looks good for a while, due to lower production in 2020 combined with recent expansion projects such as the Cheyenne Connector and the Saddlehorn pipeline expansion.

PDC also faces a dual threat in Colorado with state changes to required setbacks and freezing new drilling permits and leases on federal lands. It’s unclear how much of the setback changes will affect PDC on the road, as much depends on its ability to gain unanimous consent from tenants and/or landlords within 2,000 feet. The success rate on this is currently unknown.

The federal land issue appears to have a more limited effect on PDC as it primarily affects gas-producing areas of Colorado. PDC reportedly had 32 well permit applications for federal lands in Colorado. This is a relatively small proportion of the approximately 275 well permits it had accumulated at the end of 2020. PDC also owns approximately 200 DUCs in Colorado and combined with the permits, that would give it approximately four years of inventory during its development in 2020. rate.

PDC is now expected to end 2021 with $1.1 billion in net debt if it does not increase its capital budget from the maintenance level of $550 million. This would only represent 0.9x of PDC’s projected EBITDAX for 2021 at current strip prices.

A $5 change in long-term oil price expectations changes the estimated value of PDC by approximately $3.40 per share.

PDC Energy is capable of generating more than $500 million in cash flow positive in 2021 at current strip prices, which would reduce its leverage to less than 1.0x. PDC is in good financial shape and a scenario of WTI oil at $50 is quite positive for it. The value of PDC is however limited by regulatory uncertainty. It has permits and DUCs to continue developing its Wattenberg assets for a few years, but beyond that the combination of prolonged Colorado setbacks and restrictions on federal land drilling could narrow its development options there. .