Bond sales by South Korean banks topped 7 trillion won ($4.8 trillion) in September, a record this year, as the country’s major lenders rushed to sell debt to meet the growing demand for corporate loans and government liquidity needs, adding to oversupply and pressure to drive up market yields.

The Industrial Bank of Korea (IBK) and Korea Development Bank (KDB) – which mainly lend to businesses – each issued 6 trillion to 7 trillion won worth of bonds in September. Commercial banks offered 1 trillion to 2 trillion won.

Banks lend to businesses on average in a 4% range, while yields on three-year unsecured AA corporate bonds average above 5% and BBB bonds above 11%, steering businesses toward banks to obtain funding. 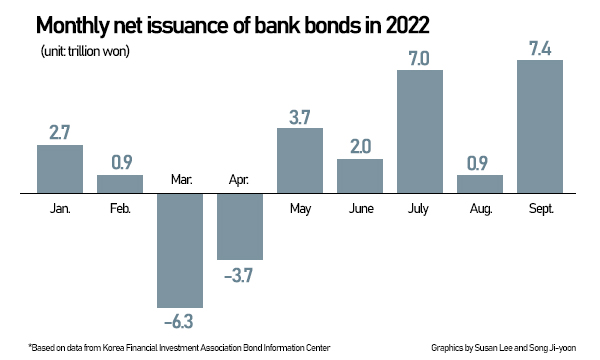 The surge in debt issuance by banks was also impacted by Financial Services Commission (FSC) requirements for banks to meet the liquidity coverage ratio (LCR) of 90% by the end of September. This is 5 percentage points higher than the current level. The LCR regulation requires banks to hold enough high-quality liquid assets such as cash and government bonds to cover 30-day cash outflows.

A surge in bank debt sales typically leads to higher overall bond yields. According to the BIS, the annual yield on five-year bank bonds rose by 0.556% in less than a month to reach 4.851% at the end of September against 4.295% at the end of August.

Rises in market yields can add to the rise in mortgages which are mostly lent at variable rates.

At the end of last month, the annual blended mortgage rates of the five major banks ranged from 4.73 to 7.141%. The three lenders with blend mortgage rates above 7% at the high end were Hana Bank, Woori Bank and Nonghyup Bank.

Another worrying factor is that a whopping 20.1206 trillion won of high-yield bonds will mature in October. Yields on bank bonds should continue to climb this month.

“The recent spike in yields on bonds maturing in less than a year will lead to further increases in lending rates for households and businesses,” said Lee Young-sun, head of the market research team. financial institutions of the Bank of Korea.

By Seo Jung-won and Susan Lee